Posted at 21:51h in Gynaecology News by Kent Kuswanto

Endometrial polyps are common findings in women presenting with abnormal uterine bleeding – heavy menstrual bleeding, intermenstrual bleeding, and postmenopausal bleeding. Its prevalence is also higher in women with subfertility. Polyps may also be diagnosed incidentally in asymptomatic women, usually through pelvic ultrasound performed for other indications. Risk factors for endometrial polyps include age, obesity, hypertension, and tamoxifen use.

While vast majority of polyps are benign, up to 12.9% of polyps have been reported to be associated with malignancy1 especially in symptomatic postmenopausal women. Conservative management may be considered in asymptomatic pre-menopausal women with small polyps <10mm in size, with natural regression rates reported as high as 27%2. Most polyps however need removal because of the abovementioned small risk of malignancy. Pregnancy rate is also higher following polypectomy in women undergoing fertility treatment3.

Polyps are traditionally removed at the time of hysteroscopy blindly, with either polyp forcep or curette. Recheck hysteroscopy is then performed to ensure complete removal of polyp. Blind curettage has been reported to remove polyps in 8% of cases. Polyp forceps increases the rate of complete removal to 41%4. In many cases, removal is incomplete, especially in smaller sessile broad based polyps. The risk of uterine perforation is 1%, with potential consequences of bleeding and visceral damage to surrounding structures such as bladder and bowel.

This should be considered the gold standard treatment when the expertise and equipment are available. Resection can be performed either with loop diathermy, hysteroscopic scissors and forceps, or morcellator (such as Myosure Lite). The recurrence rate with these technique is 0-2.5%5 as they allow hysteroscopic visualization of resection of polyp completely down to its base. This is compared to recurrence of up to 15% in traditional blind polypectomy6. Direct visualization also markedly reduces the risk of uterine perforation and adhesions. 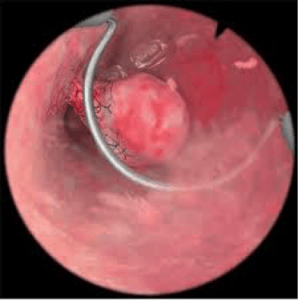 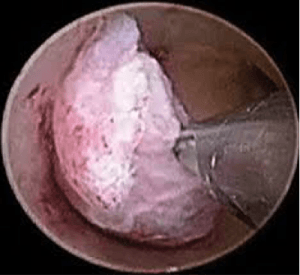